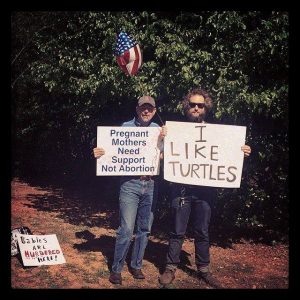 Part 1
Abortion seems to be the current “topic du-jour”. A few months ago it was… something. A few months before that it was… something else. And so on and so on. Somebody should keep a list of the always changing topics du-jour.
Part 2
I’ve said before, and I’ll say it again: I don’t give a rat’s ass about abortion. Not.. a… rat’s… ass. Make it legal, I don’t care. Make it illegal, I don’t care. But, having said that, if I were a politician I would not vote to make it illegal. Some may read that as approval. No, it is not. I just don’t see the point in outlawing something that I cannot get worked up about.

No say in abortion choices? Ok, fine. Then no say in pain medication treatment. No say in experimental surgeries and treatments. No say in assisted suicide. No say in… anything. Hell, why even license doctors?

Or, is it because abortions aren’t harmful and some other things are? Ok. Then go with that argument. Don’t cherry-pick the government having no legitimate business regulating what doctors and people choose to do with their bodies. If it’s a legit argument, it will stand on its own and doesn’t need to be emotionalized. But if you make allowance for any government involvement in any other medical aspect, then you make the allowance for government involvement in all medical topics, lest you have abandoned your own (attempted) point.

“Oh, but those are different.”, you say.

Are they, really? How so? Fact is, the whole “my body, my choice” argument is a scam. It’s not even well thought out, but it’s incredibly popular at the moment. People who spout it seem to believe it’s definitive and shuts down the opposition. But unless you’re willing to go all the way, including the issues I mention above, your point is meaningless and deserves to be dismissed out-of-hand. It’s simply not a legitimate argument one way or another.