THIS!!!… this right here is why I have been vehemently against open (crossover) primaries since Day One, and why I will continue to be against them until the day I die.  Simply put, they’re dumb.  They’re dishonest.  They’re too easily prone to corruption.  The mere concept is supremely unethical.  Bottom line:  A party and it’s people (should) have the right to solely determine who will represent them in the next election.  Nobody else.  This is not a Trump issue, this is not a Republican or Democrat issue, this is a fairness issue for everybody.  If somebody in another party intrigues you that much, change parties.  Seriously.

Only two kinds of people could possibly favor this type of set-up… 1) The naive in some Don Quixote-like quest for inclusion, and 2) The corrupt who want to artificially and insidiously jack the system and results in their favor.  And of course, like always, Mr Trump is the latter.

For those who are unfamiliar, an open primary is generally where party affiliation is not important or required and registered voters are allowed to vote for whomever they choose.  I add the word “crossover” as that’s what happens, people ‘crossover’ and vote for… or against… specific candidates with the desired end result being the eventual election of the person they actually want to win and lead.  For example, Mary Clark might want John Smith to be president, but she votes for David Jones in the other party’s primary because David Jones is a political weakling and would have no shot against John Smith.  It would also keep Robert Roberts from opposing John Smith because Robert Roberts and could beat John Smith.  How any logical thinking person cannot see this as not only a possibility, but a probability, is beyond me.

Now, if you’re of a particular bent and think, “That’s great!  I want Trump to win an easy victory.”, fair enough… but what about down the road when the same tactic is used against you and your candidate?  Will you be so happy and eager when other people are being dishonest then?  Or, will you whine and cry about the unfairness of it all and how you’re getting screwed?  For people who think this is great now, I predict the whining and crying will win out.  I mean, YOU were perfectly willing to be dishonest and corrupt, right?

The headline above comes from a New York Post article regarding another one of Trump’s high school-like pep rallies held last night, the eve of the South Carolina primary.  I know, I know, “fake news”, right?  <eye roll>  Don’t be obtuse.

Tipping has become a somewhat testy issue in recent years.  The vast majority of writings I see on the internet are only from the server’s point-of-view.  Why is that?  What about the customer?  No one ever talks about whether or not it’s unfair to the customer. You know, the person who is the one actually paying the money. Yeah, that person.

It’s supremely unfair to the customer…

There are seven states that mandate employers pay either state or federal minimum wage (MW) even for tipped employees.  Those states are Alaska, California, Minnesota, Montana, Nevada, Oregon, and Washington.  I lived most of my life in one of those states and now live in another. I can attest from first-hand experience in both scenarios, that the wages an employee makes has absolutely no effect whatsoever on tips. People all over the country tip pretty much the same, percentage-wise, regardless any other factors. And, strangely enough,when the debate over how much a tip should be no one ever allows for a discount in those seven states.  But anyway, it’s become so ingrained into our culture that what the server actually makes isn’t even a factor anymore, and I bet most of you who justify tipping by the lower wages don’t even know what the server makes when you travel. You just blindly and ignorantly tip what you would normally.

Oh, and I can also attest that menu prices are not affected, either. That argument is simply false.

So, what is it exactly that I am railing against?  I DO feel that the current status where states even allow servers to be paid less than MW is flat-out wrong and unfair to the server, as well as the customer. The mere premise flies in the face against what the purpose of MW is supposed to be about (spare me the free contract clap-trap), and it also perverts the intent of what a tip is supposed to be. A person should be paid a minimum wage at their job, and if I decide to leave a tip it should be because I want to, not because I feel guilt-tripped into it.  If I were the Wage Czar, this practice would not be allowed.

As Lt Columbo would say, “One more thing…”  Let’s be honest, even if we did pay MW as a minimum, people would still tip. It’s become that ingrained into our collective psyche. And that’s ok, but maybe it’d revert back to what it should be… a gift/reward for good service, instead of an almost bullying intimidation way to push off paying wages onto someone else.

It seems to pop up every political season.  Somebody goes to a region of the country which they are unfamiliar.  Said person eats publicly… which would put me off just by itself… and is then criticized for not eating properly.  People making the criticisms claim lightheartedness and harmless poking fun, but I call BS.  Based on how it’s done, and the fact that it’s simple politics combined with our petty political mindset in this country to begin with, I say it’s very serious.  It’s just wrapped in a “teasing blanket”, if you will, as a cover to try and get away with it and not face backlash yourself.

Well, I’m backlashing.  I hate Hate HATE this.  Just STFU, people!  Mayor Pete ate a cinnamon roll like a chicken wing.  John Kasich ate a slice of pizza with a knife and fork.  Here’s an article showing Donald Trump eating a piece of KFC chicken with a knife and fork and Barack Obama eating ice cream out of a cone with a spoon.  And let’s not forget Gerald Ford’s infamous tamale fiasco… ok, that one is hard to brush off as just a quirk, but still… I don’t know how to say this and make it any clearer… IT… DOESN’T… MATTER!!!

New Yorkers had only recently recovered from former Ohio Gov. John Kasich’s 2016 offense when he used a fork to eat a slice of pizza at a Queens eatery. The then-Republican presidential candidate dismissed his detractors on the grounds of seniority.

“I was eating pizza before you were born,” he said. 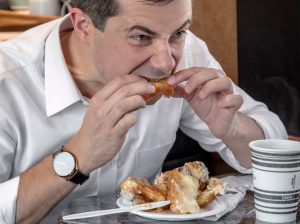 Mr Kasich has a solid defense… Shut up and leave me alone, it doesn’t matter.

Not wanting to be a buzzkill here, but our political discourse is so completely and deeply dysfunctional that we don’t have the luxury of partisan teasing right now.  It just adds to the hard feelings, which leads to even more misunderstanding and close-mindedness.  We can’t afford that.  And besides, can’t we even leave politicians alone and let them at least eat in peace?

Before I wrap up, I mention above that Fox News writes the story but doesn’t include photos.  Way to make the story even more irrelevant, Fox News!  At least Huffington post came through and posted a photo of the alleged offending Cinnamon Rollgate incident, so here’s the photo.  (Not a bad story, either.) 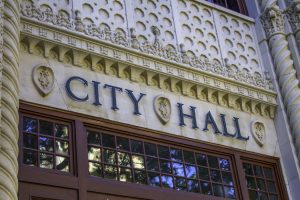 Today is the third anniversary of this blog.  Wow, three years, already, and I think seven whole people have read it.  But anyway, today is April Fool’s Day, which is so appropriate for a political blog since politics is such a joke.  (I crack up every year when I say that.)  But let me get down to business…

Local politics.  My city does something that I can’t decide is kosher, or not.  If a citizen believes a new road sign needs to be put up they cannot go to the city’s public works department and make the request.  No, they are required to go to a councilperson and convince them to put a motion on a council meeting agenda, then they discuss it in the council meeting and vote on it.  If it passes the public works department does it, if it fails they do not.

On the one hand I get that the public works department has work to do and shouldn’t be fielding all kinds of odd requests from every person who walks through the door.  And there even is something to be said for vetting ideas.

But on the other hand, I can’t shake the feeling that the true purpose is to discourage people from even making requests by making the process more bureaucratic and cumbersome.  It saves them work at city hall either way.  Sounds almost conspiracy-theorish, I know, but reality is that little tricks like this actually are employed in various places, so why not in my city?

What do you think?  Is this process legit? 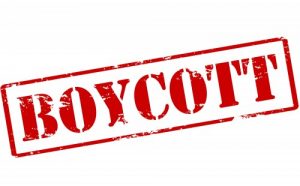 You’ve seen it before.  The person who, when some business does something they disapprove, makes it a point to let everyone know that that’s when they stopped patronizing said business.  Boycotts are very trendy right now, and seldom effective.  For every person who stops purchasing a product, someone else steps in and starts, for the same reasons as you, only the opposite side.

Now, there are some issues I can respect.  Apartheid being one, for example.  And there’s nothing wrong with a boycott, per se, I just question the sincerity of many of the people doing the boycotting.  I see a lot of posturing and posing.

For reference, a few recent examples of well-known boycotts are (there are many more, of course)…

You have to ask yourself:  How many of these self-righteous proclamations are true.    I mean, I could easily claim to be boycotting the NFL over some policy or another that I disagree with, and there are a few, but it’d be a hollow proclamation on my part.  Truth is that I’ve watched maybe only a dozen games in the last 25 years.  Not for any other reason than the league makes me feel unappreciated as a fan (and they keep screwing up the game with over-restrictive rules).  That’s it.  I truly believe that at least half the people who claim a new boycott weren’t shopping there to begin with.

I do know several people who still actively boycott Chick-fil-A, and that’s fine, whatever.  If you look at everything, though, you’d see that they’re not nearly as close-minded as is commonly believed.  Some boycotters are legit, from what I can tell, but others I believe only still do it because it’s trendy in their preferred social circle… they’re trying to fit in and be accepted, in other words.

Oh, and Chick-fil-A is expanding and doing just fine.

Personally, I choose to not boycott a business based on social and/or political reasons.  I will boycott over how a business treats their customers (read: me), but I figure that if I dig deep enough, I can find ‘dirt’ on every business, and I’m not willing to limit myself like that.

I eat at Chick-fil-A on occasion.  Their restaurants are clean, the people are friendly, the service and courtesy is awesome.  The food is even good, very good, but it’s not on the edge of orgasmic as so many people act.  For what it’s worth, I think Wendy’s does a much better chicken sandwich.