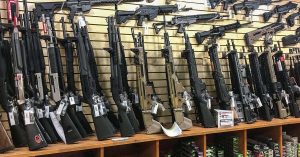 I’m going to be the contrarian… again.

The issue is mass shootings, and I am as sick of them and all the excuses as anyone else, and I am seeking a WORKABLE response, but as a Centrist (and small-L libertarian, still) that doesn’t mean I am willing to grasp at straws or buy into anything hoping something will be the answer (because we all know once an ineffective law is enacted it pretty much never gets acknowledged as a mistake and gets repealed).  Throw shit at the wall and hope some of it sticks, in other words.  I’m not going to go into all the ideas and proposals, other than to say some I see as reasonable and some I see as total crackpot wishful thinking.  What I will talk about here is the idea of holding gun manufacturers liable for shootings and/or deaths.  A lawsuit has already been filed against the gun manufacturer in the Robb Elementary shooting, and you can read about it here.

I’m sorry, but I do not approve of this, the liability factor.  The product is legal, and legal is legal.  Period.  You can say all day long until the cows come home what the purpose of a rifle is, and that’s legit, but that does not change the fact that the product is legal and the manufacturer has absolutely zero control what the customer does with it.  Ze-ro control.

I know, I know, Sandy Hook is a precedent and the legal system is allowing it, but I believe it is wrong, and actually goes against the morals of what our nation is supposed to be about… consistency of convictions over expediency.

Where your real effort should be focused, instead of suing manufacturers for something legislators allow, is to put pressure on legislators to do something in response.  Maybe make the manufacture of said items illegal, or whatever.  But as long as lawmakers allow it to be legal, it’s legal.  Maybe we should be electing lawmakers with better morals, but I digress.

And yes, I feel/felt the same about tobacco lawsuits, so there!