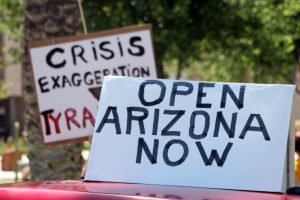 It certainly doesn’t help that we have a president who has literally abandoned the American people, leaving us to flounder and flail away trying to figure out what to do, but the various extremes of each sides are taking nonsensical approaches.  Those on the left want to lock down everything tight as a drum.  Those on the right are whining about rights and mask orders.

Problem is, while the roots of these divisions are partisan Ds and Rs, both sides are right and both sides are wrong.  A few months ago Donald Trump said (paraphrasing), “The solution cannot be worse than the problem.”  He caught a lot of crap for that, and justifiably so, because he was only concerned himself, but taken in a more broad context, well… even a dolt can be correct occasionally.

Other countries have done well.  We’re not other countries.  Right now… never, really… we don’t have a cohesive mindset like, say, Japan does.  Nor are we authoritarian… ummm… but it should be noted the countries having the hardest time with the virus are also the most top-heavy and train wreck-like leaderships.

Have you ever held an opinion for pretty much your entire life then one day you read something that makes you stop and immediately re-evaluate said opinion… and even change your mind?  I had such an epiphany about a month ago.  It has to do with the Electoral College.

Now, let’s be clear, most people like or dislike the Electoral College (EC) depending on whether they benefit or suffer from it.  Reps generally tend to like it because they benefit from it.  Dems, on the other hand, are sometimes thwarted by it, and thus hate it and want it eliminated.  Dems claim they want ‘fairness’ and ‘one vote one person’, but I call BS.  Dems want power no less than Reps do, and I flat-out guarantee you if the next Dem president were to lose the popular vote yet win the EC, 98% of Dems would cease to call for the elimination of the EC.

The right says the EC helps balance rural and urban, spreads the balance of power over the entire country instead of just a few select urban areas, and so on.  Dems poo-poo those notions.  Well, the Dems are simply wrong.  All of those reasons are legit.  Dems are throwing shit against the wall to see if any of it will stick.  So what changed my mind?

Anyone who knows me knows that I abhor extremism, so when I read that eliminating the EC would drastically dial-back extremism because all candidates would have to try to appeal to all voters… not just their bases… I stopped in my tracks.  I blinked my eyes a couple times, and… gulp!… changed my mind.  Now, would it be paradise?  Phfft, no.  But it would be a hell of a lot closer to where most people are and what would serve most people the best than what we have now.  The candidates and parties would be forced to come closer to the middle instead of their respective whack-job extremes.  More moderate presidents would also eliminate cult-like infection of Congress and the parties, maybe allowing Congresspeople to vote more their conscience rather than fear whack-job retribution.  That alone outweighs the other concerns, in my mind.

The EC affects only one election, the presidential general election held once every four years.  What about all the other elections?  Congress, states, even local.  The problems are the same, but the road there is different, and this should be considered if you honestly want meaningful reform.

High-profile aspects such as campaign finance, gerrymandering, and ballot access limits need to be addressed but I was watching an episode of “Patriot Act with Hasan Minhaj” this morning entitled “We’re Doing Elections Wrong” (s6, e7), where he describes how our current system of ‘winner take all voting’ is setting us up with bad choices, so of course we’re going to get bad representation.  Basically, the biggest vote getter, even if they’re less than a majority, wins it all.  It creates a perverse incentive in campaigning not unlike the EC.

I think the ranked voting idea has merit, an if combined with elimination of the EC, could be real meaningful election reform.  Problem is, you’d have to convince the people who benefit from the current system to go along with it, which means they’d be out, which means keep dreaming.  *sigh* 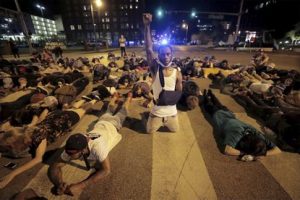 For something like eleven days now there have been protests and there have been “protests”*.  All over the country and in many places around the world.  Call me unsympathetic, but I’m kinda thinking any point that Floyd’s murder was racially biased and wrong has been made.  Now what?  It’s time to move to Step 2.

Things need to change, in people’s attitudes and actions and in law enforcement.  What are we going to do about it?  There are several option, some of which can run parallel, but has anyone even thought about it?

That’s been done before.  New programs, retraining, all that jazz.  Makes great headlines, but you have to change attitudes within law enforcement (LE) before police will actually follow them.

What I mean by this is changing people’s attitudes on race across the board.  Everyone, police and citizens.  And police are really just citizens with LE jobs.  In an ideal world this is the best and correct path to take, but I personally never see it getting off the ground if for no other reason no one would ever agree on how to do it.  It would just be another example of bureaucratic infighting with a big budget.

There are many… and I mean MANY… legal reforms that need changing, and the most significant one would be eliminating “qualified immunity” where police and other government agents pretty much have a ‘get out of jail free’ card for almost anything they do.  (Let’s not forget that Floyd’s murder would be rationalized and dismissed without the light of video.)

Where do we go from here?

I strongly suggest Option 3, at least.  Wayward police need to be held accountable for their actions, and with the real possibility of serious consequences many cops will choose to not step out of line.  It doesn’t eliminate the threat, and it doesn’t do anything regarding people’s inner attitudes, but it helps.

But how to do this?  It would require tenacious organization, dedication, time, and money… because lobbying would be involved.  And who are you going to lobby?  The lawmakers that have been in power for decades and have created and/or tolerated that laws that brought us here?  Phffft!  No, we’re also going to need a massive change in lawmaking leadership.

Regardless what is done… if anything is done, we’ve had protests and “protests” before and nothing ever changed, no one wanted to actually do the work… after people have satisfied their need for protest, serious work will need to be done.  Where does it start?  Who is going to start it?

*- “Protests” are rioting and/or looting under the guise of protesting. 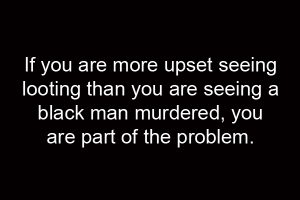 Doh!  Another unpopular opinion.  It’s really easy to get lulled into a false sense of comfort when most of our friends and/or social media contacts are like-minded people and will agree with pretty much everything we say.  We’re simpatico, ya know, we think in lock-step.  And we’re individually intelligent people, we think these things through, and we sincerely believe we have come to the best conclusion, right?

But do we always come to the best conclusion?  Sorry to say, no we don’t.  Quite often, too often, we let emotion get in the way.  Take the graphic here, which has been seen in various forms all over social media of late, since George Floyd was murdered.  “If you are more upset seeing looting than you are by seeing a black man murdered, you are part of the problem.”  Long story short, you have been shamed by the person who posted this because you don’t prioritize tragic events the same way they do… and their conclusion is correct, of course.

They say the murder of the black man is tragic and important… and guess what, they are correct.  It IS tragic.  It never should have happened.  The man’s life was important.  There are multitudes of reason why this happened, from systemic racism to utter failings of the justice system that allows police to do this with usual impunity (qualified immunity), and many other reasons in between.  No debate from me.

The next part is comparing it to looting and rioting, which to be fair many people have condemned, including myself.  The implication here is that property is not as important as people’s lives, property can be rebuild and replaced.  Again, agree.  No debate from me… as far as that goes, but it’s incomplete.

Stop.  Think to the logical conclusion.  It’s not that simple.

And spare me the outright lies that change has never been achieved without violence.  Some significant examples of successful peaceful protect include the Women’s Suffrage Parade of 1913, the Medals Heard Round the World, the Singing Revolution, the Conflict of Orders, and Martin Luther King Jr.’s March on Washington, all of which can be read in 5 Times Peaceful Protests Made a Difference in History.  You could also mention the Salt March, the Delano Grape Boycott, the Montgomery Bus Boycott, and so on.  There’s plenty of examples.

Peaceful protest will not bring change tomorrow, and that’s not emotionally satisfying, but neither will violent protest.