THIS!!!… this right here is why I have been vehemently against open (crossover) primaries since Day One, and why I will continue to be against them until the day I die.  Simply put, they’re dumb.  They’re dishonest.  They’re too easily prone to corruption.  The mere concept is supremely unethical.  Bottom line:  A party and it’s people (should) have the right to solely determine who will represent them in the next election.  Nobody else.  This is not a Trump issue, this is not a Republican or Democrat issue, this is a fairness issue for everybody.  If somebody in another party intrigues you that much, change parties.  Seriously.

Only two kinds of people could possibly favor this type of set-up… 1) The naive in some Don Quixote-like quest for inclusion, and 2) The corrupt who want to artificially and insidiously jack the system and results in their favor.  And of course, like always, Mr Trump is the latter.

For those who are unfamiliar, an open primary is generally where party affiliation is not important or required and registered voters are allowed to vote for whomever they choose.  I add the word “crossover” as that’s what happens, people ‘crossover’ and vote for… or against… specific candidates with the desired end result being the eventual election of the person they actually want to win and lead.  For example, Mary Clark might want John Smith to be president, but she votes for David Jones in the other party’s primary because David Jones is a political weakling and would have no shot against John Smith.  It would also keep Robert Roberts from opposing John Smith because Robert Roberts and could beat John Smith.  How any logical thinking person cannot see this as not only a possibility, but a probability, is beyond me.

Now, if you’re of a particular bent and think, “That’s great!  I want Trump to win an easy victory.”, fair enough… but what about down the road when the same tactic is used against you and your candidate?  Will you be so happy and eager when other people are being dishonest then?  Or, will you whine and cry about the unfairness of it all and how you’re getting screwed?  For people who think this is great now, I predict the whining and crying will win out.  I mean, YOU were perfectly willing to be dishonest and corrupt, right?

The headline above comes from a New York Post article regarding another one of Trump’s high school-like pep rallies held last night, the eve of the South Carolina primary.  I know, I know, “fake news”, right?  <eye roll>  Don’t be obtuse.

I’m going to need some help here.  I keep seeing and hearing people comment that the economy is so much better under Tramp than it had been under Obama.  My question is:  Where do people get this impression?

And this even presumes a sitting president has a direct and substantial immediate impact on the economy… which they don’t.  They have influence, not direct impact.

Is the economy doing well?  You bet it is.  Is unemployment at a long-time low?  Damn straight it is.  So what’s he problem?  Call it a character flaw if you want, but I don’t like being lied to.  Not to mention that lying about does absolutely nothing to improve a situation, it just serves to bolster the ego of a megalomaniac.

So let’s take a look at some stats over the last 10-ish years.  Please note the trend indicated by the solid and straight red line…

From 2010 to today, a straight line upward.  Maybe it’s just me, but I see no discernible difference. 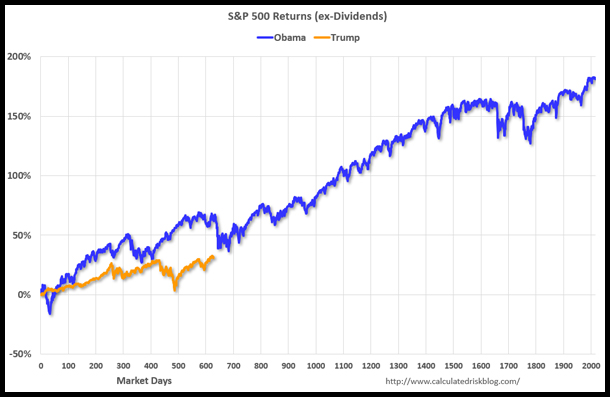 I didn’t have to do a line on this one, because they already did it for me.  The fact of the matter is that the S&P under Trump is actually worse than under Obama at the same point in their administrations.

The downward trend of unemployment has been going steadily down since 2010.  In fact it seems to have evened off, and was actually steeper from 2014 to late 2016.

There is nothing… literally nothing… for Trump and his supporters to brag about here.  Don’t believe me?  Read No President Trump, Obama’s Economic Recovery Was Not A Con Job from Forbes.  Or, would that be considered “fake news” because it’s not what you want to hear? 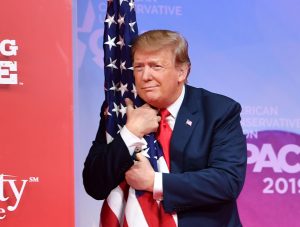 A few months ago I commented to a friend on Facebook that Donald Trump is not a patriot.  They asked, “How so?”, so in true procrastinator fashion I waited three months or so to put this together.  It seems that hardly a week goes by that he doesn’t demonstrate this, and with so many examples it’s hard to come up with them all in a casual conversation, so here we go.

I touched on this before in What is a patriot?, but this is specific to a particular individual, Mr Donald Trump.

And this is only a partial list.  Bottom line:  A patriot puts the country first in deeds, not just words and rhetoric.  A patriot doesn’t need to tell everyone how patriotic they are.  Donald Trump is no patriot. 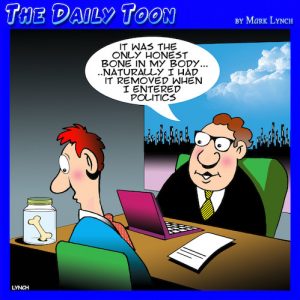 You see it everywhere.  In politics it IS everywhere.  Literally everywhere.  Willful bias… intentional deception… lying-by-omission… shoot, even outright lying.   And to you “America haters” that like to blame all the world’s ills on America, as if we’re the only society that does any of this stuff, political dishonesty is in every corner of the world.  Every country, every society, every economic class… even every ideology.  It’s not just us and it’s not just the other side.

But I’m not talking about those people here.  Those people might be dishonest in their arguments, but they’re at least honest in their chosen sides.  In my last post I talked about different types of voters, and this post is loosely related.  I’m talking about individuals who are dishonest in their ideologies.  The difference is this person can be of any ideology.  Lately they seem to be primarily from one side only, but in no way is that a given.  So, how can you spot these people?  The scenario usually goes something like this…

To be honest, I question the sincerity of them wanting term limits, but that’s another topic for another post.

I could name four close friends who fit this description, and they all might be reading this and think I’m talking about them, but I’m not.  Not individually.  In addition to my friends I see this scenario played out in multiple places and by multiple people.  It baffles me why people do this.  Maybe they’re unaware of the depth of their own inconsistency, maybe they’re uncomfortable picking a side and sticking to it, or maybe they’re just… dishonest.

Bottom line:  Actions speak louder than words.  If you’re going to claim to be objective and/or even-handed, you need to be advocating for the other side, too, otherwise you’re just jaw-jackin’.