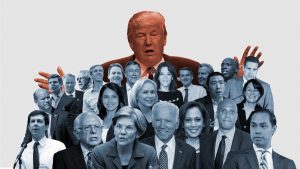 Fairly simple question.  Referring to the 2020 presidential election, of course.  We’ll face facts, President Trump isn’t exactly popular, regardless what his sycophants say, and the only reason he won in 2016 was the amazing good fortune to draw an opponent less popular than himself.  And sure, he tells us how great he is, but any adult rational thinker dismisses what he says out-of-hand.  But… even with all that he could win re-election.  It’s hardly far-fetched.  Incumbency is powerful.

I’m looking straight at you Mr and Ms Far Left.  First off, erase the notion swimming around in your mind that you’re moderate or mainstream, because you’re not.  You are part of the problem.  You are as much a whack job as many Trump supporters, just a mirror image on the other side.

You need to check your excitement and nominate someone you won’t be enamored with.  It’s well known that party primaries give extreme candidates the better shot.  They’re speaking to the choir, so to speak.  They can spout all their fanatical dogma with the far left voters lapping it all up… with said far left voters being a big enough block within the party during a primary to swing a nomination… and not a general election.  This is why a tried-and-true strategy for candidates is “move to the right/left in the primaries, move to the center in the general election”.  The primaries aren’t watered down with ‘those other people’.

If you nominate a radical you like, such as a Bernie Sanders or an Elizabeth Warren… someone possibly farther to the left than Trump is to the right… then you run the risk of alienating independent and moderate voters… and re-electing Trump.

Is that what you want?  Do you really want to take the chance of having Donald Trump as your president for four more years?  No?  Good, then listen up.  Swallow your pride, take a deep breath, and accept that your best shot at ousting Trump is to nominate someone closer to the actual middle.  Someone you’re not enamored with.  Sometimes you might even disagree with on some issues.  Someone who honestly appeals to voters in the middle.  I’m sorry, but it’s the true middle and independent voters that are going to swing the next election.

I know that gave you a full body shudder.  Take a cold shower and work to unseat Mr Trump.  Donald Trump, if he survives impeachment, is vulnerable.  Take advantage now while you can.  Get something instead of nothing.