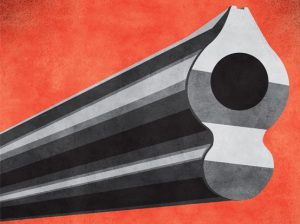 Procrastination is the bane of my existence.  That’s my official personal motto.  That, plus I tend to think about things longer than most people to the point that when I do say something it’s already outdated and ‘old news’.  Other people have moved on to something else.  I guess I write for later when people will stumble on this months or years after the fact trying to gain an understanding or perspective.

So now that I have that out of the way, we’ll get into the meat of the topic. A few weeks ago there were two high-profile mass shootings.  One in El Paso TX and one in Dayton OH.  The majority… the vast majority… of what I see in reporting and commentary and social media posts (which do have value, sorry to say), our mass shootings are pretty much all white men as perpetrators, and pretty much all conservatives and/or white nationalists/supremacists, and so on.

I mentioned social media having value.  I know it’s not trendy to say so, but I believe it does.  There are a lot of thoughtful intelligent people out there, and they give these issues great thought.  Some are conservative, some are liberal, some are in between, so the conclusions will vary, but it has value.  Our opinions are no less valid than anyone else’s.  That being said, there are also a lot of knee-jerk poorly thought out conclusions out there, too, so we have to learn to separate the two.  In this vein, some of the memes placing all blame squarely on conservative white men are overwhelmingly common… and irresponsible and wrong.

To this end, the Washington Post, hardly a conservative propaganda rag, published an opinion piece a few days afterward titled, If Trump is responsible for El Paso, Democrats are responsible for Dayton that made some very interesting points.  Did you know that the Dayton shooter was most likely a left-wing radical?  That’s ‘left’, not ‘right’.  It appears so, take note of this per the linked article…

But if Democrats want to play politics with mass murder, it works both ways. Because the man who carried out another mass shooting 13 hours later in Dayton, Ohio, seems to have been a left-wing radical whose social media posts echoed Democrats’ hate-filled attacks on the president and U.S. immigration officials. The Associated Press reported on Monday that a Twitter account that appeared to be his “showed tweets labeling himself a ‘leftist,’ bemoaning the election of President Donald Trump, supporting Democratic Sen. Elizabeth Warren and encouraging people to cut fences of immigrant detention centers.”

There’s more examples than just that, read the whole article, but this should serve as a reminder to any person claiming to be objective that these incidents are not all one-sided in motivation.  Knee jerk reactions and bias confirmation don’t serve us well.  The world is complex.  Stop.  Breathe.  Listen.  Consider objectively.  Sleep on it before you react (though maybe not ten-plus days like I often do, like I did here).  There’s been enough shootings that you can already be decided about gun control in general.  That’s fine.  That’s not what I’m talking about.  I’m talking about when you consider and discuss the causes and motivation behind each individual incident, because they’re not all the same, in spite of your bias wanting them to be all the same.