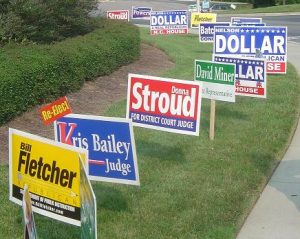 Do you post political endorsement signs in your yard?  Advertising for your preferred candidate and/or political issue, basically.  Do you do so during every election cycle?  Do you do so only in years where you are extraordinarily passionate about a particular candidate or issue?  If so, may I ask “Why?”

Is it as simple as only wanting to share your preference?  I can see that.  It’s not something that I would do, but that makes sense to me.  But, does it go deeper than that?  Are you hoping, possibly subconsciously, that you can influence other people’s decisions who are on-the-fence or undecided?

On the surface that would make less sense to me.  Yet, when I think about it, I know that many people are indeed easily influenced.  For example, I firmly believe that one of the reasons so many people choose to re-elect Congresspeople that they know they dislike instead of taking a chance on a third-party alternative they may like better is a subconscious need to be identified with a winning side.  I find that to be a weakness of sorts, but I believe it to be true.  In a similar vein, is it possible that a dominant number of yard signs in a given geographic area can influence some people to vote for that candidate… to want to be part of the “in crowd”, to want to be on what they are perceiving to be the winning side?

Ok, but what about me?  I have never… ever… posted a political endorsement sign (or sported a bumper sticker on my vehicle) for any candidate or issue.  I have no plans to ever do so.  Not because I am ashamed of my positions and opinions, I most certainly am not as evidenced by this blog.  I am willing to tell people my opinion.  To me they’re just passive self-aggrandizement with no real purpose, and I’d rather not have the clutter.

There has been great controversy regarding Donald Trump and his tax returns.  Will he make them public?  What’s in them?  When, or under what conditions, will he make them public?  He has constantly said that he is under audit and that he would release them after that is done.  I call BS on that, as I believe that even if the audit did close, he’d just come up with another excuse… like he did during the first debate with Hillary Clinton by going back and forth between the audit status and her releasing her emails.

So, it came as no real shock to anyone when, according to the New York Times, Trump “…declared a $916 million loss on his 1995 income tax returns, a tax deduction so substantial it could have allowed him to legally avoid paying any federal income taxes for up to 18 years…”.  This has caused quite the brouhaha.  In the debate, Hillary Clinton implied that he was cheating the American taxpayers by not paying taxes (prior to the NYT story coming out).  Since the story, many others have been claiming the same thing, and these people are wholly wrong.

From Day One I have not understood Trump’s appeal.  He’s a buffoon.  He’s an opportunist.  He’s a divider.  HE HAS NO SUBSTANCE!!!  He’s the proverbial “snake oil salesman”… and so many people are just lapping it up.

If you are a Trump supporter, you are an idiot.  You are gullible.  You are easily led.  Bottom line:  You are a low-information voter!  If, at one time, I trusted your political opinion, I no longer do.  You have shown yourself to lack discernment.

…and not only do I stand by that assessment, I feel more strongly than ever.

Be that as it may, provided that Trump’s deductions and paying zero in taxes was legal… and said presumed legality is key to this… there is nothing wrong here.  Not only that, but it is what the tax system was designed to do.  If anything, it is an indictment of the tax system itself, not Mr. Trump.  If you want people like that to pay their “fair share” of taxes, whatever that is, then change the system.  Don’t act like he’s a tax cheat because he didn’t pay extra, like a charitable donation.  Would you do that?  I doubt it, and I know I wouldn’t.

It should also be noted then-Senator Hillary Clinton was part of the Congress that sets tax law, and I do not recall this type of tax reform being a burning issue of hers.  She did nothing.  This makes her comments and attitude over Trump’s lack of taxes paid hypocritical. 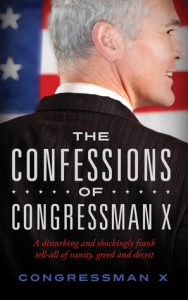 Haven’t you ever wondered what really happens in Washington?  Wouldn’t you like to be the provincial “fly on the wall”?  The book, The Confessions of Congressman X, has potential, but also comes up disappointing in several areas.  I don’t think there are any real surprises, just confirmations, but maybe some things are actually worse than we suspect.

Goodreads.com would be another good place to gather some information.  A couple quotes from the book…

“It’s far easier than you think to manipulate a nation of naive, self-absorbed sheep who crave instant gratification.”

“My main job is to keep my job, to get reelected. It takes precedence over everything.”

One of the primary criticisms I have read from others is that they already knew this.  I call BS on that.  Anyone who has ever spent time in an online political debate knows that anything not cited is dismissed as hearsay, and I believe that the people making this claim are simply being arrogant and hypocritical.

My impression is that the Congressman is a House Representative, which would explain why he feels the need to constantly place re-election above everything else.  A Senator, with a six year term, has more leeway in that regard.

I would give the book 2.5 out of 5 stars.  The information desperately needs to be known and shared, but the lack of a known source brings it down.  Personally, I do not regret spending the $10 for it, but really if you go to sites like Goodreads and Amazon, because it is so short you can get the gist just from reading quotes and reviews and save the money.